In 1996, Bill Clinton was president of the United States, the Olympics happened in Atlanta, Tupac died, Apple Computer purchased NeXT Computers from Steve Jobs, and my mother didn’t have cancer. My father was still alive too. It was a good year.

In 1996, I was getting to know Elizabeth Hunzinger, a super-smart, donut-hating, couscous-loving, opinion-sharing girl. It was a good year.

I used one of my dad’s old checkbook boxes and taped a 3×5 card on it. With electrical tape. It was fancy.

I placed a piece of paper in the box. And I waited.

And the little booger surprised me.

I was fifteen once, in 1996. Little did I know that in a year my life would be shocked with the shell of a dying mother. Cancer. Horrible, terrible, no-good, Cancer.

I didn’t know that life would change. A lot.

I didn’t know my dad would change as Cancer attacked his brain, stripping personality and neurons. And then he died.

But I was fifteen once, and I did write a list. I wrote:

Desires of My Heart ~ Psalm 37:4 “Delight yourself also in the Lord, and He shall give you the desires of your heart.”

~ To become a pilot
~ To be a husband and a father
~ To have many godly children
~ To be a missionary
~ To have a harmonious home
~ To have a loving wife who greatly loves the Lord
~ To keep myself pure for my wife
~ To be a proclaimer of Truth
~ To have many grandchildren [I told you already that Elizabeth was the smart one. I’m now    thinking my math was a bit off.]
~ To develop law skills 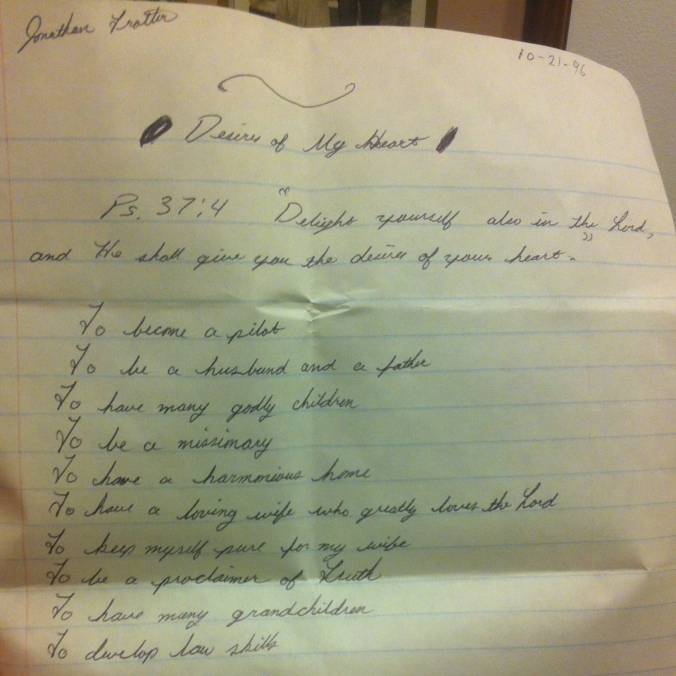 Life doesn’t always turn out. Sometimes the straight and narrow doesn’t seem so straight. I know that. I know heartache and heartbreak, and deep, echoing loss.

This time-capsule shocked me. To be honest, it sort of bothered me too.

But it also reminded me. He is good. He is faithful. And he is worth it.

And it got me thinking…

7 thoughts on “I was fifteen once”

In addition to my international clients, I currently meet with five students from Ozark Christian College who are preparing for cross-cultural missions. It’s been cool to be on Zoom and all, but I’m looking forward to meeting with clients again in person starting this week!
Elizabeth’s latest over at trotters41.com. Link in profile.
I’m very grateful for this gust of fresh air...
“Home Depot at Dawn”