He’s just a carpenter. A blue-collared day laborer. And he’s the one who builds mountains and stars.

He’s just a carpenter. A townie, a long long ways from cosmopolitan. And he’s the King of kings.

But he’s just a carpenter, uneducated, the son of nobodies. And he’s the dearly loved son of the Father.

The crowds are blind, eyes filled to the brim with scoffing, incredulous. They can’t see beyond their own limiting words.

And by his grace, we are too.

So when people see us and laugh, saying we’re “just a” whatever, we smile and nod and run to Jesus.

And there we sit among the wood chips, remnants of a Roman cross, and we belly laugh with the Carpenter who saved the world.

Jesus left that part of the country and returned with his disciples to Nazareth, his hometown. The next Sabbath he began teaching in the synagogue, and many who heard him were amazed. They asked, “Where did he get all this wisdom and the power to perform such miracles?” Then they scoffed, “He’s just a carpenter, the son of Mary and the brother of James, Joseph, Judas, and Simon. And his sisters live right here among us.” They were deeply offended and refused to believe in him.
Mark 6:1-3

Elizabeth is over at A Life Overseas today. . . .

For the past several years I’ve chosen a “word for the year.” Each word is meant to serve as a rudder for the year, a way to focus my attention and direct my inner life. Sometimes I very specifically sense God’s leading in the word; such was the case of “Listen” in 2011 and “Encourage” in 2013. Both of those words started with quiet whispers from God that were continually confirmed throughout the year. Words — and years — like that feel very successful.

But other times I’ve chosen words that simply seemed to fit my spiritual needs at the time, as has been the case for the last two years. In 2015 I chose the word “Peace,” mainly for the warm fuzzy feeling it gave me. I just wanted a little bit of rest. Some peace and quiet. But throughout that year, God peeled back the layers of my illusory peace and revealed relationships in my life that were not actually at peace. My year felt like a failure until right at the end, when relational reconciliation emerged as an eleventh-hour gift from the Father.

Maybe that year wasn’t such a flop after all, I thought. It gave me the confidence to choose a word again. So in 2016, I chose the word “Steady.” I wanted to have steadier emotions no matter the amount of stress I was under, and regardless of which day of the month I was on. I thought this was a great goal. I wanted to be like Caroline (Ma) Ingalls – wise, calm, and gentle in all circumstances.

Basically, I wanted to be perfect.

And it was a complete flop.

Jonathan’s over at A Life Overseas today… 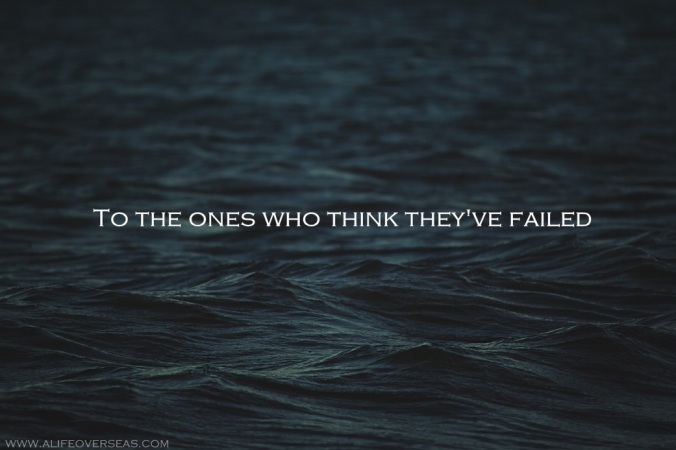 Good-hearted people in your organization (maybe) and your churches (hopefully) tell you you’re not a failure. But you still feel like one. You came home before you planned. Maybe for health reasons. Maybe for burnout reasons. Maybe you don’t need reasons. You were done, so you finished. You came “home.”