Note: The following blog post discusses long-term unrelenting stress. I wrote it just before Jonathan became severely ill with viral meningitis. He was sick for over a week, and at times his high fever and extreme pain frightened me. (He’s not quite fully recovered yet.) Long term unrelenting stress can be evaluated numerically by something called the Holmes-Rahe Stress Scale. Stress is cumulative, and as it accumulates in a person’s life, the Holmes-Rahe score increases. When the score is high, a person’s risk for physical illness increases. The double whammy about stress and illness is that not only can higher stress levels lead to illness, but illness itself causes higher levels of stress. The fact that Jonathan’s illness delayed the publication of this post simply illustrates my point: we have been under greater stress lately.

Long Term Unrelenting Stress: a phenomenon we learned about during mission training. Stress that simply refuses to let up. The little things — and big things — that put pressure on us in life.

Long term unrelenting stress has been appearing in our lives lately. It ranges from the mundane of ant armies invading my kitchen and laundry taking 4 days to dry completely, to the profane of living in a house with post-trafficked girls on one side and 30 institutionalized children on the other, to the insane of neighbors blasting their music at odd hours.

And lately we’ve felt the time crunch of Jonathan’s increased language study and my increased homeschooling responsibility. As he has increased his language hours, mine have correspondingly decreased, and I often feel embarrassed that my vocabulary, comprehension, and pronunciation skills are far below his. In fact, shop owners and neighbors usually tell me that this is so (as if I didn’t already know??). After 2 weeks of intense homeschool lessons, I finally got the chance to talk to my neighbors. I could not understand the grandmother’s Khmer, and she could not understand my Khmer. Her granddaughter was forced to translate our Khmer to each other. Fortunately, both of us understood the granddaughter.

Chatting with my neighbors reminded me that I need to venture into the community regularly to practice language. In fact, our field coordinator and his wife told us at the beginning of our training that even if I don’t have a ministry role outside our family, I need to learn the local language. If a wife doesn’t learn the local language, they told me, she can feel isolated and eventually want to go back home.

I decided I needed some quality time with my host country.

So I went out alone the next morning. I don’t drive in this crazy Asia traffic, so I hired a tuk tuk to run my errands. My tuk tuk driver didn’t know the location of any of my desired destinations, so I had to give him directions. In Khmer (quite the accomplishment considering I couldn’t read a map when I first married Jonathan). I bought the school supplies and groceries I needed and used only one word of English: tortilla. (Is there a Khmer equivalent??) While I waited for those tortillas, I felt confident enough to initiate conversation with the workers.  And what’s more, I enjoyed it. 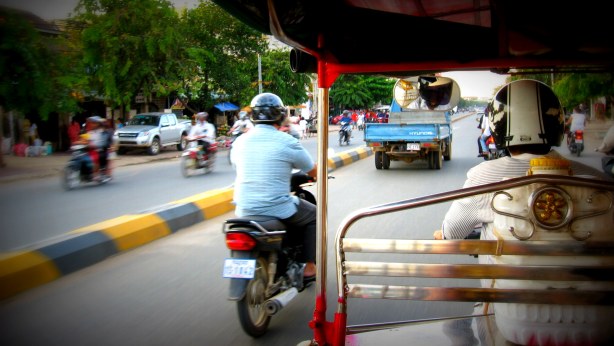 Passing the Russian Market on my way home, I noticed the tourists (who by now are easily identifiable) and realized how far I’ve come since deplaning on January 16th. I feel comfortable getting around the city by myself.  I returned home with a great sense of accomplishment – a definite yay day in an ocean of yuck ducks.

But the bonus that God provided? That afternoon I got to tutor math (thankfully that was in English). Tutoring math is one of my favorite things to do. (And I am not even joking.) From time to time in America I had the opportunity to tutor math, but I never dreamed I would get that opportunity a mere 8 months after moving here.

Our approximate four score years on this earth will invariably be seasoned with long-term unrelenting stress. But I thank God for the remarkable joys He has given me lately.

2 thoughts on “Yuck Ducks and a Yay Day”

The guy who taught me the most about purity (aka "purity culture"), Bill Gothard, was later credibly accused by over thirty women of disgusting sexual behavior and crimes.
What an absolute blast to finally meet @marilyngardner5 in person! Marilyn's an amazing writer and leader and, as you can tell, a bit of fun. :)
What an absolute joy and privilege to spend some time with believers in Kyrgyzstan this week, talking about the heart of Christ and how to see the hearts of the hurting.
Ready for Day 3 in Bishkek, Kyrgyzstan! 🙂 We needed to take a detour yesterday and discuss abuse and "forced forgiveness."